Most remarkable turnaround in 2009 is one titanic meltdown

Forget the New Orleans Saints and their potent offense. Forget the Denver Broncos and their newfound defensive prowess under a 33-year-old head coach. Nothing has been more shocking in 2009 than the demise of the Tennessee Titans.

Once thought to be a Super Bowl contender after going an NFL-best 13-3 in 2008, Jeff Fisher's squad has plummeted to depths almost unheard of by NFL standards. The lasting memories of this miserable 0-6 beginning to the year will be the Titans laying down in the snow in a 59-0 demolishing at the hands of the New England Patriots. But just as troubling was their 20-point loss in Jacksonville two weeks ago, or being held out of the end zone last Sunday night by the Indianapolis Colts.

The Titans have been outscored by 114 points thus far, and even more shocking is the lack of effort they have showed the last few weeks. This from a team that took the Super Bowl champion Steelers to overtime in Week 1 and only lost its next two games by a combined 10 points.

Winnable games lie ahead, as the Titans will face the Jaguars, Bills, Texans, and Rams later on, but that will only allow them the opportunity to avoid being remembered as one of the all-time bad teams. Based on yesterday's no-show against New England, however, a date with any of those teams is no guarantee.

Are the Cardinals primed for a letdown? Not with Fitz

Even if the Arizona Cardinals do indeed wallow in yet another case of Super Bowl hangover in 2009, you can count on one thing. Larry Fitzgerald will continue to amaze.

Let's face one distinct possibility: that Kurt Warner will not make it through an entire season. History is highly stacked against quarterbacks in their late 30's playing in 16 games in back-to-back years. Warner did so last year, the first time since his St. Louis days in 2001.

The Cardinals were able to hang on to some of their key players, franchising Karlos Dansby for a second consecutive season, locking up Adrian Wilson long term, and at least for now, keeping Anquan Boldin quiet about his displeasure with his current contract situation.

To boot, they have a soft schedule, and an even softer division, the NFC West. Since 2000, the only Super Bowl loser to return to the playoffs the following year was the Seattle Seahawks in 2006, beneficiaries of the same weak division. So the Cardinals, woebegone until their amazing run last year, have that to look forward to.

The biggest questions as far as personnel go for the Cardinals lie at the hands of Matt Leinart, the team's first round pick in 2006 who has started just 16 games in three years. Leinart has had his desire questioned somewhat by head coach Ken Whisenhunt, and many still wonder if he can lead Arizona should Warner go down.

But alas, even a partied-out Leinart can rejoice in the awesomeness of Fitzgerald, the game's top receiver who put on a show last January and February when the Cardinals shocked football fans everywhere. Rookie running back Chris "Beanie" Wells also has a chance to lighten the load on Cardinal quarterbacks this year and keep Arizona's offense among the game's elite.
Posted by Michael Seff at 9:41 AM 2 comments:

You thought Favre was selfish? Cutler tops all

Maybe the Jets will end up with Jay Cutler. If they do, they'll have traded for a selfish, whining quarterback for the second straight year. Last year, the Brett Favre soap opera carried out all summer, and it resulted in a messy divorce between Favre and the Packers. This year it shouldn't take as long, which should just make it all the more evident that Cutler is in a league of his own when it comes to selfishness. And babiness. And sensitivity. And whininess.
Now, Josh McDaniels is an inexperienced coach, and a chip off the Bill Belichick block. To flirt with the idea of trading Cutler to get an overrated quarterback in Matt Cassel is ludicrous. But flirtation is flirtation, not infidelity. No trade was ever made, and Cutler was to be the man leading the Broncos.
But now, Cutler has complained to no end. He isn't returning the team's phone calls, as if he were a child who had something said about his momma and doesn't want to confront the situation. The Broncos' franchise quarterback is gone, and a team that once had high hopes for 2008 could be in real trouble. Thanks to one man's complete and utter immaturity.
Posted by Michael Seff at 8:50 AM 2 comments:

Orioles manager Dave Trembley offered his thoughts on the state of his team and some of his newcomers before Sunday's exhibition game against the Minnesota Twins. Some snippets:

On pitcher David Pauley, acquired in a trade with the Boston Red Sox: "The first time he pitched he was out of his lane, so to speak... The last two times he's pitched he been very good. He's a control guy, sink, curveball, he pitches early to contact. He's gonna get an opportunity to pitch. He's a guy that's in the mix.”

On veteran hurler Mark Hendrickson: "[He] had movement, had some life on his pitches. He says that's the best he's felt."

On former Cubs prospect Felix Pie: "He's worked very well with Crow [hitting coach Terry Crowley]. I think he's the kind of guy that needs to play a lot... He's been a little bit better than what I thought. I didn't know the guy. I saw him a long time ago... We want him to start being a line-drive type of hitter... His work ethics have been tremendous.”

On the Twins and their philosophy which has worked so well for them over the past several years: “They play baseball the old fashioned way... They police themsevles... They rely on their farm system, they bring their own guys up... You know when you play them, you better bring your A game because they're going to come at you all 9 innings.”
Posted by Michael Seff at 9:14 PM 1 comment:

I always say when I pick Boston or New York, I HOPE I'm wrong. If I pick them and they fail miserably and someone comes back to me at the end of the year and says, "See!", I'm perfectly fine with that. With that said, I will try not to let my hatred of the Evil Empires stand in the way of my sure-to-be-off predictions:

Clippers slip: Sign of things to come for Celtics?

If there's one thing I've learned about Boston sports, it's that just when you think you have them where you want them, they defy all odds (and I mean ALL odds) to make some sort of miracle comeback. The Celtics may not be an exception, but it's hard not to revel in last night's 93-91 loss to the lowly Clippers in L.A. No Kevin Garnett, but no excuses. The Celtics have won with players out, so you can't have it both ways, Boston.
The Eastern Conference is still soft, which is what mainly benefited Boston last year in their ridiculous turnaround. But Cleveland needs to capitalize on what looks like it could be a mini midseason swoon by Boston.
I'm sure that something like this won't happen again, so let's enjoy it while it's here. Boston was 66-16 last year, a record they likely will not match this year. Cleveland has one loss at home all year. The sagas of the two cities are well-chronicled, with Cleveland being a notorious choke town and Boston being a charmed town. But if just this once there is no miracle left for a Boston team, perhaps such an inexcusable loss is in fact a good sign.
Posted by Michael Seff at 9:22 AM 1 comment:

Message to 31 teams: Don't mortgage the farm for Cassel

It almost might work out in what looked like the worst of circumstances for the resident cheaters of the NFL. Sacrificing one year of making the playoffs may let them earn some depth and security for years to come. Why? Because their so-called "system", the one whose legitimacy has still yet to be verified, allowed a mediocre quarterback to look like an elite one. Matt Cassel is just that, mediocre. But he will be making the most money in a one-year tender for a franchise player in league history next year, because the Patriots used their franchise tag on him. That means that if some team is foolish enough to try and snag him, they will owe the Patriots two first-round draft picks. Meanwhile, it's not like the Patriots won't be in good hands at quarterback without him.
So if a team like, say, the Minnesota Vikings finally wakes up and realizes Tarvaris Jackson can't cut it at this level and decides to sell out for Cassel, they will be handing the Patriots two first-round draft picks for a player who shouldn't even command one seventh-rounder. It will also save the Patriots plenty of salary cap money, rather than keep them financially constrained. The money freed up by Cassel's possible departure could allow them to land a malcontent like Julius Peppers and turn him into the second coming of Corey Dillon.
So to those other 31 teams, even those with dicey quarterback situations, please, please don't fork over more than $14 million for the product of a strong offensive system whose receivers push off and whose line cut-blocks as if it was going out of style. Save the money and the draft picks and keep Cassel where he belongs, on the New England bench chewing up valuable cap space.
Posted by Michael Seff at 9:29 PM No comments:

What is football's best rivalry?

The best place in baseball to watch a game 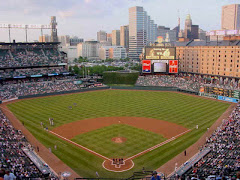 Other blogs/sites worth checking out

Michael Seff
If I didn't love sports, I wouldn't have this page.